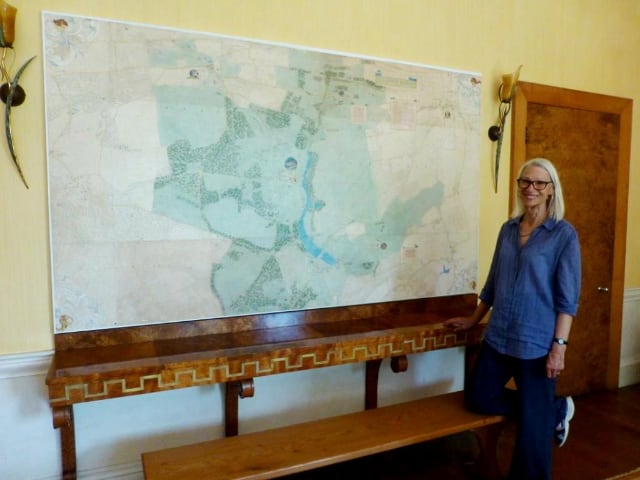 In this last newsletter of the year the main item is about a newly discovered MacDonald Gill map. There’s also news of a major London exhibition featuring two of his maps: the poster Highways of Empire and a little known sketch map of the Port of London. Read on!

It is not often that a new Max map comes to light but in June this year it happened! One morning in June I opened an email from Sarah Webster who wondered if I’d be interested to know that there was a painted MacDonald Gill map on a wall of Hampton Lodge, her family home near Farnham, Surrey. As you might imagine, I was thrilled!

After poring through Max’s ledger I found the relevant payment entry which simply describes the work as ‘Dec. ord. map’. Although this entry is undated, the payment receipt survives amongst family papers at the Lodge – this is dated 4th September 1931.

The owner of Hampton Lodge was Eustace Edward Thornton (1875 – 1948), a very successful business man who dealt in jute in the family company of Levy and Knowles which operated between Calcutta, London and Liverpool. He lived in Upton in the Wirral and married Myrtle Estelle Bellamy the daughter of the vicar of Upton in 1920. After buying the Hampton Estate near Farnham in 1928, he sought professional help for alterations from Max’s friend, Oliver Hill (1887 – 1968), the modernist architect and designer.

In his early career, Hill had been mentored by Lutyens, but he became best known for his Art Deco buildings, including the magnificent Midland Hotel (1932-33) in Morecambe (Max’s brother Eric Gill created several striking bas reliefs for the interior). Described as ‘child-like’ and a ‘non-conformist charmer’, Hill would delight Max’s children by turning up to their West Wittering home in his open-topped Rolls Royce (blue with pink trim!) with one of his exotic menagerie – usually a parrot or a monkey – perched on his shoulder. You can find a 1930 photo of him with his monkey at https://www.ribapix.com/oliver-hill_riba2973-30#

Thornton consulted Hill on various architectural alterations to Hampton Lodge, including designs for the gates and entrances for the main Georgian house. He also asked Hill to design the interior furnishings – a remarkable commission which produced one of the most outstanding collections of Art-Deco furniture in the country. At the same time – as the ledger entry confirms – Hill asked Max to paint the wall map of the estate; the cost was 50 guineas (£52. 10s).

In July this year I was welcomed by Thornton’s granddaughters to the house to see the work for myself. It consists of a set of 6-inch Ordnance Survey maps – bought by Thornton from Stanford’s at a cost of £9.6s.8d – cut and pasted into a large rectangle measuring about 7 ft by 4 ft. It has stood the test of time fairly well: the writing has faded a little and there is some discoloration but there are no losses. The Hampton Estate lands of 1931 are shown in pale green watercolour wash.

Hampton Lodge and other landmark buildings, such as Rodsell Manor and Seale Church, are depicted within small roundels.

Touchingly, Max has also added the figures of Thornton’s two young children Richard and Mary on the edge of a small wood. A stag in a nearby clearing is a reminder that the house was originally built as a hunting lodge. 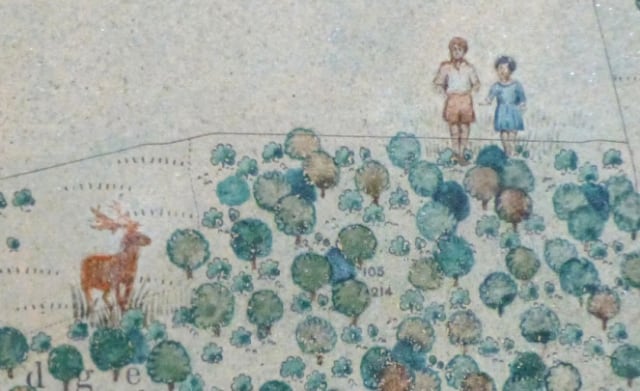 For the local historian there are short texts in Max’s familiar calligraphic writing revealing the origins of local place names as well as the ownership details of Hampton Lodge. The winds at the four corners of Max’s maps often represent people in his life. The red-head in the bottom left may be Alice Brettells, a married woman with whom Max had a close friendship for several years until the autumn of 1931. 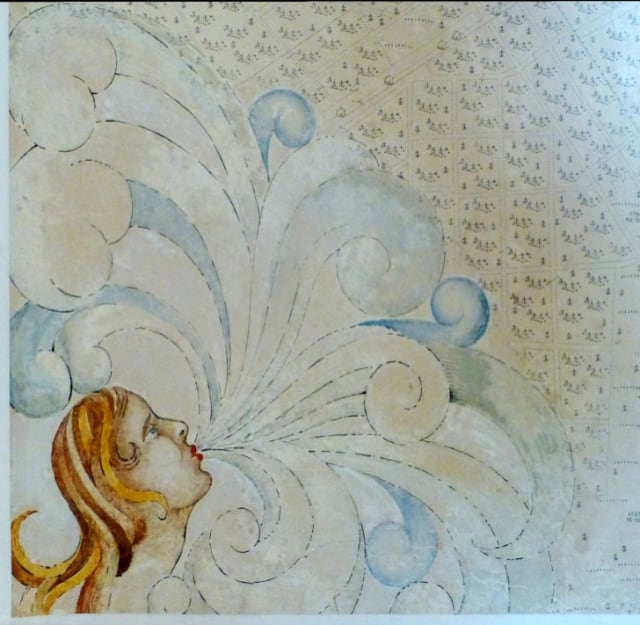 The Hampton Estate is still run very much as a family enterprise, thriving under the stewardship of Bridget Biddell, one of Thornton’s granddaughters, and her husband Bill. It has a prize herd of slow-reared, pasture-fed beef cattle and tends the last commercial hop gardens in Surrey, supplying several craft ale breweries. The Estate’s woodland and pastures have also been the location for a number of feature films including The Dig, Ammonite, Robin Hood, and Goodbye Christopher Robin, as well as episodes of TV series such as Cursed, Poirot and Midsomer Murders.

The house isn’t open to the public but the Hampton Estate does hold occasional public events such as Farm Sunday in the summer. You can find out more at their website: https://www.hamptonestate.co.uk

London: Port City and The Map that Never Was

Two Max maps are on display in London : Port City, a wonderful free exhibition of the Port of London’s history now on at the Museum of London Docklands. One of these maps is Highways of Empire, an eye-catching poster produced for the Empire Marketing Board to encourage people to Buy Empire Goods. On display is the smaller poster version (H 102 cm x W 153 cm), rather than the 48-sheet giant that first appeared on city hoardings on New Year’s Day 1927. It depicts the world in a strange hemispherical projection that results in two South Poles. Here in the icy wastes there are polar bears, somewhat confused at their being in the Antarctic rather than the Arctic, their proper home. 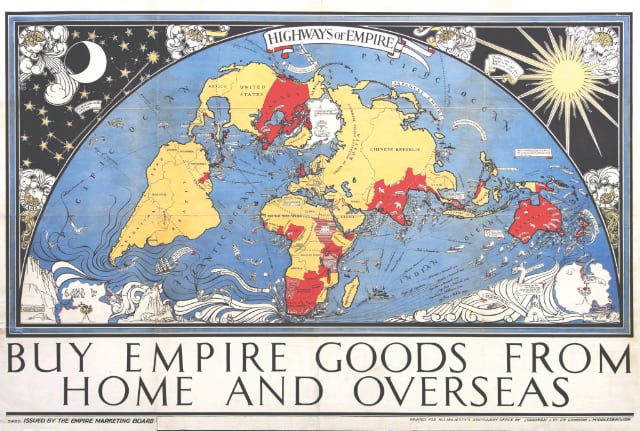 It was Max’s most popular map of the 1920s; thousands of copies were printed in various sizes and many were displayed in schoolrooms across the country. If you’d like to know more about this iconic commission, do look it up in my book MacDonald Gill: Charting a Life (copies are still available).

The other map on display is a pen-and watercolour sketch dated February 1925 that shows a part of the Port of London. Measuring 470 mm high by 370 mm wide, the artwork seems to be a sample intended to give the PLA an idea of how one section of a large five-panel painted map might look. The scroll on the map details key PLA facts and figures for that time. In early 1925 the Port covered 3288 acres of land with a water frontage of 33 miles, serviced by 630 cranes and with warehousing for over a million tons of goods. The previous year the Port had handled a record cargo volume of 41¼ million net register tons due in part to the opening of the King George V dock in 1920 and the dredging of the channel to allow more and larger vessels. Quebec Dock – completed in 1925 – would add another 15 acres.

Pencil notes indicate that each panel was to be 12 ft 3 ins by 9 ft 6 ins (373.4 cm by 290 cm); if made, this would have been the largest painted map of Max’s career to date. In contemplating such a major artwork, the PLA were clearly feeling proud of their achievements. Max was paid five guineas for the design in May 1925 but there was to be no commission – perhaps they decided the final work would be too expensive. For information about the exhibition follow the link: https://www.museumoflondon.org.uk/museum-london-docklands/whats-on/exhibitions/london-port-city

I also recommend Stephen Constantine’s excellent book Buy and Build: The Advertising Posters of the Empire Marketing Board, (Public Record Office, 1986) – it’s out of print but you can find second-hand copies on the independent booksellers’ site https://biblio.co.uk/ 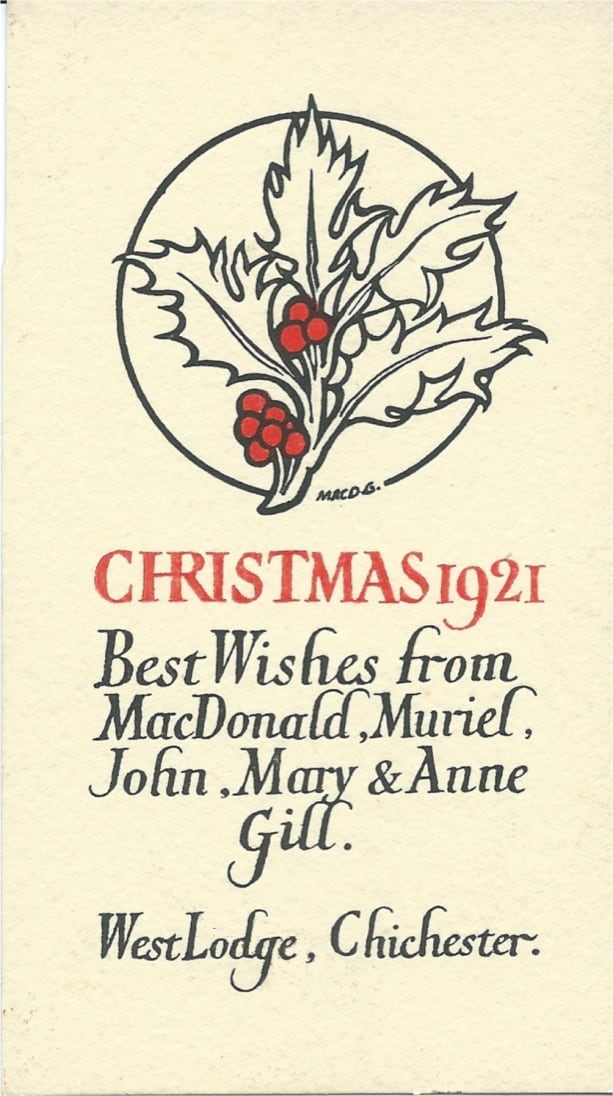 Happy Christmas
and a peaceful and healthy 2022 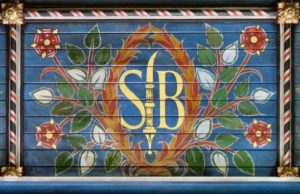 The last year has been a strange one for everyone.  I hope that you’ve all stayed well, had vaccinations, and coped with the several lockdowns