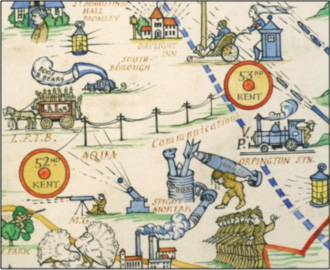 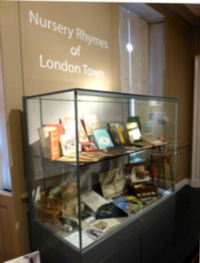 The Nursery Rhymes of London Town centenary displays in 2016 have delighted Eleanor Farjeon fans and attracted a new audience to MacDonald Gill’s work. There were displays in a succession of libraries including Hammersmith, Westminster Archives Centre, Kensington, and Fulham as well as an exhibition at Burgh House in Hampstead, Eleanor’s home territory. There’s still a chance to see the Holborn library display which has been extended to 23rd February. There’s also an evening talk here on Thursday 12th January given by Anne Harvey, Eleanor’s literary executor, and myself.

On 19th January I’ll be giving a talk to the Dorset County Decorative and Fine Arts Society in Dorchester, my first as an accredited NADFAS lecturer. The association promotes the arts and crafts through lectures and trips; they also fund and run art and craft workshops for children and adults. Dorset is an appropriate place for a Max event as from 1914 to 1919 Max lived in Turnerspuddle, working as architect-in-residence on construction of the Bladen Estate model farm and village, so my talk will include plenty of local references.

The British Library exhibition ‘Maps and the 20th Century: Drawing the Line’ continues till 1st March and includes two of Max’s maps. It’s an absolutely fascinating show with every type of map possible from postcard propaganda to Ernest Shepard’s map for Winnie-the-Pooh! I’ve been twice and still haven’t seen everything. 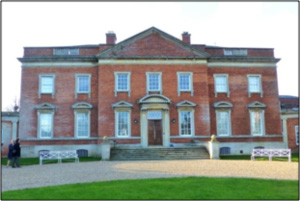 From Easter to the end of October Kelmarsh Hall near Northampton is hosting an exhibition: ‘MacDonald Gill: Charting his Age’. This elegant 18th century mansion was once the home of Nancy Astor’s niece, Nancy Lancaster, one of the so-called ‘American Princesses’, best known for creating the ‘English country house style’ so it has beautiful interiors to admire as well as extensive landscaped gardens to explore.

The Hunting Passage is the permanent home of Max’s splendid ‘Map of the Pytchley Hunt’ (detail pictured), painted in 1930 for Nancy’s second husband Ronald Tree, an Anglo-American who became the MP for Market Harborough as well as master of the local hunt. The exhibition includes many of Max’s key works and explores the links between the events they depict and the lives of Kelmarsh inhabitants. A highlight will be two privately-owned painted maps including a bird’s eye perspective of the furniture designer Ambrose Heal’s country home. A date for a three-part talk given by Andrew and Angela Johnston and myself is still to be programmed – keep an eye on the website for details of this and other events. 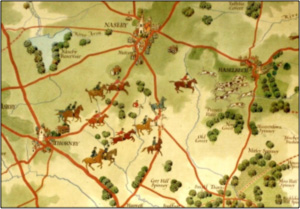 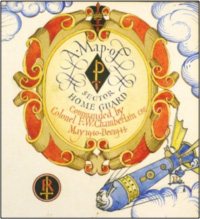 Last July an unusual painted map came to light. The discovery was made by Bryan Matthews, a Bromley-based Home Guard historian, who was researching in his local archives. The 3ft square framed map illustrates the Home Guard ‘P’ Sector, showing the main landmarks alongside the network of defence systems, including observation posts, anti-aircraft guns, searchlight bases, barrage balloons and fire services, as well as local hostelries.

The Home Guard – immortalised in the BBC TV comedy ‘Dad’s Army’ – was the civil defence force of volunteers formed in 1940 to combat a German invasion. Many lives in Kent, including Bromley, were lost during the war as a result of German bombing as it was directly under the path taken by many Luftwaffe sorties in the Blitz. In late 1944 this air-route was nicknamed ‘Buzz Bomb Alley’, depicted in the south-east of the map, after the dreaded pilotless ‘Buzz Bombs’ or ‘Doodle Bugs’. It was their sound that terrorised – they had a sinister ‘rasping whirr’ which would be followed by an ominous silence before the inevitable deadly explosion. Max has naturally taken a more light-hearted view of all these activities, as the details here show. The Bromley map was presented by the men of ‘P’ Sector to their commander, Colonel Walter Chamberlain, a local solicitor, when the Home Guard was disbanded in December 1944. Currently this unique map lives in storage, safe but unseen to the public. I feel it deserves to be on permanent display in the borough as it depicts such a momentous period in Bromley’s history.

I do hope you’ve enjoyed this newsletter. Feel free to pass it on to anyone you think might be interested. Do get in touch if you’d like to know more about any aspect of Max’s life or work, or if you have any information you’d like to share. Please let me know if you don’t want to receive any more newsletters. 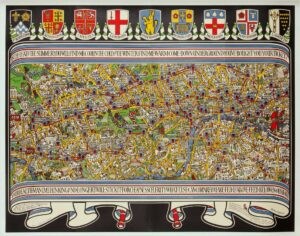